Tales From The Ammo Box

Tales From The Ammo Box 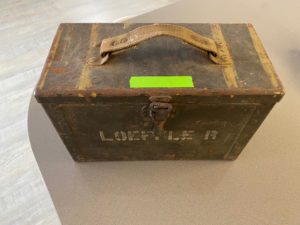 Preface: The ammo box is a physical illustration of how I stuffed my grief.

As I start this storyline, I begin to understand the relationship that I have with my father who died less than a year after I got married. That was 45 years ago and I can’t help but think that our hopes and dreams were never to be realized due to his health failing him. It was ironic that the man who never seemed to have a sick day or failed to go into the office could go as quickly as he did.

I realize now that the long hours he put in contributed to his early death.

Not only working at his regular job but his commitment to many after hour drafting jobs to help support the family that he created for three children relinquished through adoption. His health decline, rapid as it was had signs that as a young man I did not recognize. After all, I was going to live forever so why didn’t he?

As is true with many who suffer loss, there was an expectation that there was time to plan and act upon those plans. How quickly that evaporates when life throws you a curve. The more unexpected, the more unprepared you are the harder the new reality hits home and knocks you flat. It was true for me and my siblings. Each of us had expectations of how dad who be there for us. My sister would miss him walking her down the aisle for her marriage. My brother would miss Dad’s attending his graduation. I would miss the opportunity to work with him on projects, working side by side as my dreams changed after he died.

Remnants are all I have.

The ammo box is just one of the token pieces of his life that I have to reflect upon. The ammo box which now represents the place where I buried my emotions after the death of my daughter and never had the tools to constructively deal with my grief. The contents of this real ammo box reminds me of the contents of my psyche, bits that surface from time to time to remind me of my success and my failings. For example, after he passed I realized that it held among other things drill bits. A perfect metaphor for drilling down into grief and the emotions struck when trying to get to the my truth.

Now as a father, I have come to realize that as much as I attempted to have a better and different way of raising my own family that there were gaps in how we raised them. Conflict was one of the blindspots where I failed to show by example how to deal with one of the troublesome aspects of humanity. Namely, we don’t always agree with one another and that this gives rise to conflict. The basics of fight, flight or freeze are not the only options to deal with conflict when it arises. There is a constructive conflict option that allows for open questioning and the attempt to reach a satisfactory resolution without resulting in a harmful conclusion.

In our family, my initial instinct was to freeze when I would get myself into a situation where my parents had to reprimand my actions. Whether it was getting caught smoking as a teenager, bringing home grades that were not up to my potential or being late for family dinner. I was stuck like the deer about to get slammed by the truck frozen in the glare of my parents eyes.

In grief, we likewise have options that usually manifest as freeze because we are unaccustomed to being in the situation of having to deal with what is confronting us. It stops our forward motion and it seems like time is paused. Fleeing isn’t an option in the case of an accidental or unexpected death and there is no fight response because you have lost what you would fight for. Freeze is usually accompanied by a general disconnect from the situation and many poor decisions and choices can affect the outcome.

What Nancy & I have come to realize is that having the conversations now before a crisis is involved can deepen our connection and opens our hearts to our loved ones. Then when the time occurs, the communication is already there. Then the bedside watch as death comes knocking, isn’t as much a traumatic drama. What has been revealed in these preemptory conversations will have filled the gap, salved the hurt and have made way for a better death. Preparing for a better death by breaking the seal that locks our words in our hearts and de-ices the chill that keeps us silent in our inner dialogue. That is our hope in continuing to explore this uncharted territory and to change the conversation around grief.